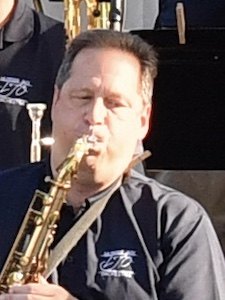 Mark Heinz is an accountant and tax consultant by trade and has been a member of LJO since 2016. He also currently performs with the La Crosse Symphony Orchestra and the Wausau, Wis.-based Swing Shift Big Band and Swing City Big Band. Over the years he has played in a wide variety of musical styles from jazz and Dixieland to rock to country to classical to polka to old-time music. His performance credits include James Moody, Ed Shaughnessy, Carl Fontana, Don Menza, Bob Brookmeyer, Mel Lewis, Lew Soloff, Carl Allen, Richie Cole, Pat Boone and others. In addition, he does fill-in church organ work and has sung in various church choirs throughout the U.S. and Europe.