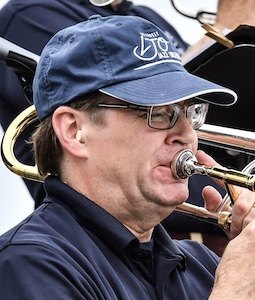 Mark Glasel first played in the La Crosse Jazz Orchestra as a college student in 1982. He has been the principal trombone for the La Crosse Symphony Orchestra for 25 years. He also performs with the Seven Rivers Jazz Band, Reunion Jazz Quintet, La Crosse Brass Quintet and the Funkin’ Donuts band. He also worked as a professional musician for two years at Disney World in Florida. Mark holds a BA from UW-La Crosse, with a double major in computer science and music, and a ME-PD from UW-L with an emphasis on computer science education. He worked in IT at the Trane Company for 29 years and is now retired.