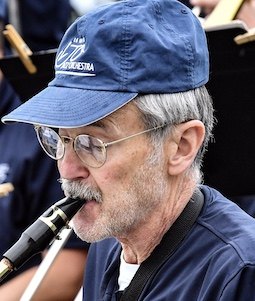 Harry Hindson is a saxophonist with LJO. He also plays bassoon with the La Crosse Symphony Orchestra and the Winona Symphony Orchestra. He performs as principal clarinet with the La Crosse Concert Band, and on various saxophones as needed with the Great River Big Band. Harry earned a BA in Music Education from Luther College in Decorah, Iowa, was president of the Dorian Music Society, and band soloist including a concert at Lincoln Center. He then joined the U.S. Navy Band in Washington, D.C. for seven years, and concurrently earned a MM degree in saxophone performance from the University of Maryland. He earned a DMA in saxophone performance from the University of Wisconsin. Harry was saxophone, clarinet and bassoon instructor at Luther College from 2003 to 2011, and is currently adjunct saxophone and bassoon instructor and woodwind methods instructor at Winona State University and adjunct woodwind instructor and woodwind methods instructor at the University of Wisconsin-La Crosse. In 2013, Harry was honored by Luther College with the Carlo A. Sperati Award for lifelong excellence in the field of music.