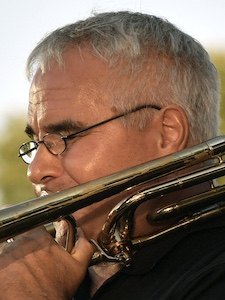 George Von Arx is a widely respected music educator and musician, with over 40 years of teaching and playing experience. A graduate of the University of Wisconsin-La Crosse, he was the director of bands at Holmen High School for 32 years and continues working with students as an adjudicator/clinician for the Wisconsin School Music Association.

He has been a member of the La Crosse Jazz Orchestra and the La Crosse Symphony Orchestra for over 30 years. In addition, he has played with the La Crosse Concert Band, the Two Darn Hot Dixieland Band, the La Crosse Brass Quintet, and the Grumpy Old Men Swing Band. He has also been part of the horn lines for the Pinsetters, Fax and Company and the Fourth Demension. George also plays for St. Joseph’s Cathedral Masses and Viterbo University productions as well as various organizations and groups in the area.