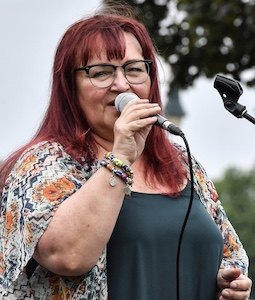 When she’s not singing with LJO, Cathy fronts the seven piece dance band, Cathy Reitz & 7Swing, along with her jazz trio, 3 of 7. She performs regularly with the La Crosse Jazz Orchestra and the Troppo Jazz Orchestra from Chippewa Falls. She is also known for performing many roles in regional theater and recording commercial jingles. She performs classically as an event soloist or with semiprofessional choirs as well as performing jazz and the Great American Songbook. She has taught choral and vocal music for over 45 years. As a Master Adjudicator for the Wisconsin School Music Association, Cathy works with WSMA judging contests, solo and ensemble festivals, and large group festivals. She also adjudicates and critiques soloists in show choir competitions and is a sought-after clinician and guest conductor in the state of Wisconsin and Minnesota. Cathy continues to be an active performer along with conducting two local choirs: Chippewa Valley Community Chorus and Stand in the Light Memory Choir, a choir for those with early to mid-stages of dementia.